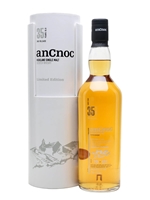 The second release of 35-year-old whisky from AnCnoc, the oldest bottling in their regular range. A combination of a small number of bourbon and sherry casks to produce a balanced, sweet and fruity dram with notes of honey, vanilla, and a hint of smoke.