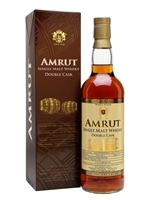 The second release of Amrut's Double Cask is a blend of two whiskies: one aged in a bourbon cask from June 2009 and one PX sherry cask from May 2010. This shows excellent balance between sweet vanilla and coconut flavours from American oak and rich fruit from the European wood.