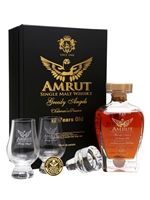 At the time of release in 2017, this is the oldest-ever whisky to come from India. Released to celebrate the 60th anniversary of Amrut's European importer, this is rich and incredibly complex with notes of dark chocolate, vanilla, mango and mixed spice.