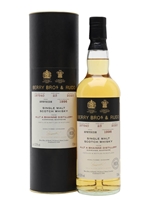 A 1996 Allt-a-Bhainne single malt from indie bottler Berry Bros & Rudd, matured in an ex-bourbon barrel for more than two decades before being bottled in 2020 as part of its Winter Releases. The palate offers notes of vanilla, coconut, cinnamon baked apples, melon and shortbread that linger in the finish.