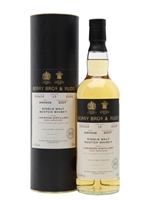 A 2007 Linkwood single malt from indie bottler Berry Bros & Rudd, matured in a single refill hogshead for 13 years before being bottled in 2020 as part of its Winter Releases. The palate offers notes of fruit salad, toasted oak, tangy citrus, soft spices and green bananas that linger in the finish.