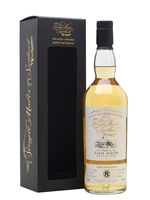 A smoky dram from Aird Mhor (aka Ardmore distillery). While nearby distilleries are better known for unpeated whisky, Ardmore bucks the trend, making a powerful and smoky dram. This single-cask bottling from The Single Malts of Scotland – distilled on 1 December 2009 and bottled at years old on 25 June 2018 – is a classic, with punchy smoke, honey and lemon.