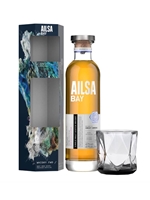 A lovely gift set that includes a bottle of Ailsa Bay Sweet Smoke and s stylish tumbler. Ailsa Bay Sweet Smoke is both peatier and sweeter than its predecessor. It has, however, gone through the same micro-maturation process as the first edition - one that sees the spirit first filled into smaller-than-average bourbon casks for six to nine months, a process which accelerates maturation before it is then transferred into more traditional casks for several years.