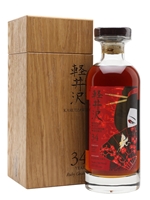 The younger half of the Ruby Geishas – the penultimate release in the Karuizawa Geisha series – this 34-year-old release is exclusive to The Whisky Exchange and being sold by ballot. It was matured in a single sherry butt and its time in cask have given it a rich and complex character with layers of sherry-oak and spice.