This is not a new expression from Glenmorangie, it has been around since January 2016 and is part of Glenmorangie’s travel retail portfolio. It is also available via some on-line specialist Whisky outlets.

Founded by William Matheson in 1843 and sits on the banks of the Dornoch Firth.

Dr Bill Lumsden is the Director of Distilling, Whisky Creation & Whisky Stocks. It is said that his favourite dram is the Glenmorangie Original. In 1995 he joined Glenmorangie Company where he is now responsible for the development of all Glenmorangie’s expressions.

There is a legend that just offshore is the shipwreck of a 16th-century Spanish galleon. The Tayne continues this legend having been finished in in selected Amontillado Sherry casks, a quite unusual finish in Whisky maturation.

Let’s open the bottle and have a wee taste. 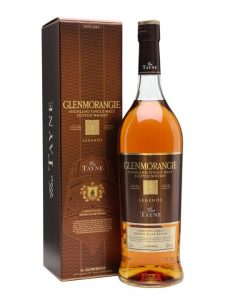 This is one of my favourite drams in a while, it is an Amontillado sherry finish but there were no excessive sherry notes, I felt that it was more of a red wine cask that was used in the final months of maturation, a delight.

Priced at £79.95 and worth every penny, a delicate and delightful dram this is an ideal winter dram.