As Jim is a subscriber to the great Scottish magazine, The Scottish Field, he applied a little while ago to be one of their reviewers to visit a specific type of hotel and write a short review for publication. 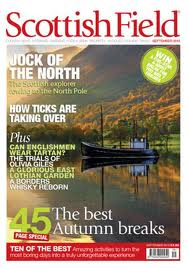 So a couple of months ago Jim was asked to take part in the review of a Whisky Hotel, I hear you all saying “right up his street”. So Jim received from The Scottish Field’s Sub-editor, Tim Siddons all the details for Jim and his wife Jacqueline to visit the Taychreggan Hotel on Saturday 16th July 2011.

Below is a slightly longer version of Jim’s review which is now published in The Scottish Field’s September issue which was published on the 10th of August.

We anticipated our trip to the Taychreggan Hotel would take about 3 hours and we were not wrong. The hotel is found off the main road at the end of a 7 mile single track road in its own bay on the shores of Loch Awe.

Taychreggan Hotel dates back over 300 years and once was a drovers inn. The scenery, once at the hotel, is breath taking and we’re 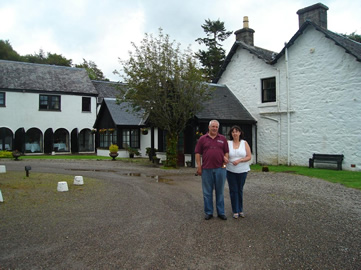 writing this whilst sitting by our opened bedroom window, drinking in the wonderful atmosphere of Scotland at its best. The 3 hour trail had given us a bit of a thirst and as this hotel is classed as a Whisky Hotel it was only right and proper that we checked out the Whiskies on offer. The bar had almost 40 Single Malts. The prices in the bar for Single Malts were exceptionally competitive ranging from £4 – £5.75. The two Whiskey’s sampled were Ben Nevis 10 year old and a Tobermory 10 year Old.

The bedroom we were allocated was fabulous and had period furniture including a four poster bed with the view as described, it just melted our hearts. The en suite facilities were of a high standard with the nice touch of Molton Brown toiletries.

The hotel does offer various activities such as air Rifle Range, Archery, Mock Roe Deer Stalking, Clay Pigeon Shooting, Falconry, a half day hunting with a Hawk, and inside was a full size snooker table, but we opted to take advantage of the tranquillity, and let the fresh loch breeze blow a calmness over us. 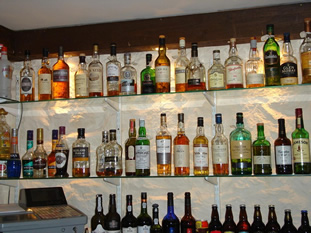 Prior to dinner we headed to the bar for pre dinner drams – comprising of Auchroisk 10 year old and a local Oban ale. The menu on offer, which changes daily, offered a choice of two starters, two mains and three sweets and included a chefs appetiser and a sorbet. The food was superb and we can only compliment the new head chef Calum Hall.

After dinner we chatted to the Bar Manager Peter McNaught who used to work for Oddbins and is well versed in Whisky. Peter shared with us his intention to extend the Whiskies on offer and we engaged in a chat re preferences and palates of the worlds Whiskies. To finish off a delightful night the drams of choice were a large Caol Ila and a large Dalmore.

In the morning we had a fabulous choice of dishes to choose from for breakfast before we reluctantly headed back home. 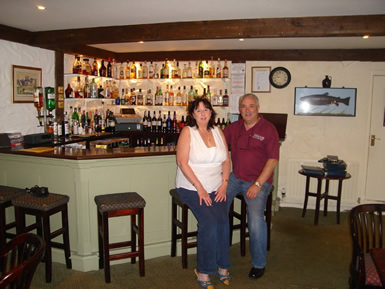 Our overall view of this hotel that is owned by an American couple, is that she is a delightful old lady, set in a spectacular part of Scotland, has new and enthusiastic staff and gives off a sense that there will be on-going tweaking to their style and delivery of quality hospitality and fine dining.

Jim and Jacqueline had a fabulous time and we have to say a BIG THANKS to the Scottish Field for giving us this opportunity to visit this little gem of a hotel set in grand surroundings.

So to all our readers we highly recommend you subscribe to The Scottish Field, not only for it’s in depth articles and tales of all things Whisky but if you love Scotland then this is a must magazine for you.