Whisky Boys Jim is off to Ireland

Whisky Boys Jim is off to Ireland

On Monday the 28th of June 2010 Jim and his wife Jacqueline are heading of to Ireland for a 7/8 day break.

We start our little holiday staying with Philip and Lorraine Giles who live just outside Belfast in the little coastal town of Donaghadee.  From this base we have many wonderful places to visit, including Grace Neill’s bar, which is listed as ‘the oldest pub in Ireland’. 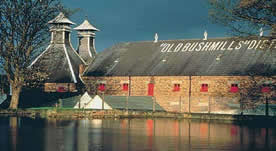 You can have day trips up the Antrim coast to the Giants Causeway and a Distillery visit to Bushmills which is close by.

One of our plans is to visit Cooley Distillery which is just north of Dublin.

If you check out our Whisky Tastings you will see we have tasted two of the Connemara Peated Whiskeys and grand malts they are. We are both looking forward to our trip over the Irish Sea and we intend to visit the Guinness Brewery in Dublin and I am sure Jacqueline will enjoy a day’s shopping in Dublin too.

So look forward to Jim’s report on his little break/holiday/Whisky Boys Distillery tour.  But dare I say it there is just one small regret, and that on the 30th of June both Dougie and Nicola will be attending the Scotch Malt Whisky Society in Edinburgh/Leith for their special tasting evening, Jim has been to the last two tastings and have found it to be one of the best in his annual Whisky events.