On the 10th of June The Whisky Boys received an e-mail from Roseanne Niven (An Account Executive with The Big Partnership, Edinburgh) that on behalf of Cutty Sark we were offered a pair of tickets to the Opening Night Film and the Opening Night Party of the Edinburgh International Fil 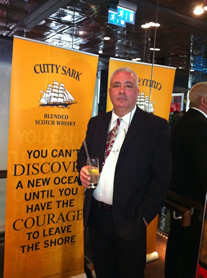 The Boys quickly replied with, we would be delighted to attend.

Jim and Nicola drove through to Edinburgh for this special night out. The night started with us going to the Festival Theatre and enjoying the premier of The Guard, funny but quite adult Irish movie, with a great cast and thoroughly enjoyed by all in the theatre.

After an enjoyable movie it was only a short walk to The Teviot, Bistro Square where the Opening Night Party was being held. This was a very busy venue and we were all offered a refreshment or two. After having a good walk around this large venue we then hit upon the Cutty Sark Bar, this is where the Whisky Boys enjoyed the great cocktail which was made with a shot of Cutty Sark, shot of triple sec, loads of ice, slice of lemon and lime then topped up with lemonade, just wonderful and refreshing.

The only disappointment was that we did not meat Roseanne, as she had a previous engagement in London.

No sooner were the Whisky Boys back home when a few days later another invite from Roseanne. The Whisky Boys being cordially invited to the Cutty Sark Short Film Competition Launch for drinks and a sponsored film showing as part of the Edinburgh International Film Festival on Friday 24th June at The Rutland, 1-3 Rutland Street, Edinburgh at 5 pm

Drinks and canapés will be served between 5 pm – 6.30 pm along with a welcome from Jason Craig, Global Brand Controller, Cutty Sark and Gavin Miller, CEO, Centre for the Moving Image.

Jim was free to attend this event, but Nicola had a very important deadline and was unable to attend, Jim’s wife Jacqueline was the appropriate substitute.

This time we went through to Edinburgh by train, on arrival headed up Princess Street to the Rutland, met by Roseanne and were given the fabulous Cutty Sark cocktail and some delicious canapés, this was followed by a short introduction on the newly launched Short Film Competition and the details are:-

Cutty Sark Blended Scotch Whisky together with the Centre for the Moving Image (CMI) today launched a short film competition for emerging filmmakers as part of a new commitment from Cutty Sark to support independent filmmaking. 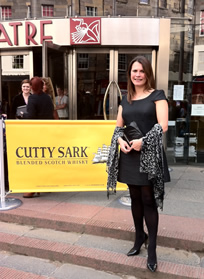 This follows an announcement from earlier this month of a partnership between the Scotch whisky brand and CMI which included a significant investment in the Edinburgh International Film Festival (EIFF).

The successful filmmaker will win a £5,000 commission from Cutty Sark to develop part of their on-going global visual communications for the brand and to showcase a selection of those films including the winner, at EIFF 2012.

Entrants are asked to depict the personality of ‘Cutty Sark, The Spirit of Adventure’, in a 60-90 second short film. A judging panel will look for those films that fuse the sociable nature of Cutty Sark with a sense of adventure which lies at the heart of the brand.

A shortlist of 10 films will be selected by a panel of judges and will be showcased at EIFF 2012.

Jason Craig, Global Brand Controller, Cutty Sark Blended Scotch Whisky, said, “Being a brave and adventurous Scotch whisky, we are delighted to deepen our partnership with the Edinburgh International Film Festival. Freshness and innovation are important characteristics for all filmmakers and we decided to launch this competition to support and encourage pioneering filmmaking. We look forward to seeing the entries and hope to attract emerging filmmakers that share our brand’s sense of adventure.”

Graeme Davies, Head of Commercial Development, Centre for the Moving Image/EIFF, added “I am delighted that we have had this opportunity to create what I believe is an innovative and important film and moving image partnership.”

Jim had a great chat with Jason enjoyed talking about all things Whisky, thanks for your time Jason.

Jim and Jacqueline enjoyed the cocktails and chatting with Roseanne and some other guests, some old some new.

After cocktails and a great chat we all took the short walk to the Filmhouse for the screening of Meet Monica Velour, this was a bitter sweet adult movie and was very enjoyable and certainly made many of the audience have a good belly laugh. Kim Cattrall certainly acted her socks off, but can anyone out there find out if she was actually the one that was in the shopping cart.

Kim Cattrall finished off the evening by spending a little over half an hour doing a Q & A session with the audience, this was great and well received by everyone, thanks for that Kim.

So a very BIG THANKS to Roseanne of the Big Partnership and Cutty Sark for the invite and some fantastic hospitality.

P.S. Near the end of June Jim and Jacqueline took a short trip to Ireland to visit some of our family, as Jim knows that many of the people we were going to see were not necessarily Whisky drinkers, Jim took the opportunity to take a bottle of Cutty Sark and a bottle of Triple Sec, the reason for this was to introduce them to the grand cocktail Jim has experienced over the last week or two.

One of the people Jim introduced this cocktail to was the well known artist Duncan Irvine, who loved the three cocktails he had that evening.

Jim and Jacqueline held a little cocktail lesson for half a dozen of the guests and they said that they are going to spread the word.