Message in a Bottle: 100-Year-Old Whisky Reveals Its Secrets

The Whisky Boys were excited to hear that Richard Paterson has recreated a 100 year old Mackinlay’s blended Scotch Whisky, now that would be an interesting tasting . Read the article below for more information:

Message in a Bottle: 100-Year-Old Whisky Reveals Its Secrets 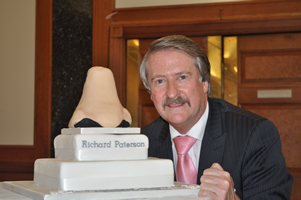 The company’s master blender Richard Paterson spent a painstaking eight weeks marrying and blending a range of malts to get an exact replica of the 100-year-old Mackinlay’s liquid.  And according to one independent expert, he has got the copy exactly right.

Renowned whisky writer Dave Broom is the only other person in the world to taste both the original whisky and Whyte & Mackay’s new liquid.

He said: “The Shackleton Whisky is not what I expected at all, and not what anyone would have expected. It’s so light, so fresh, so delicate and still in one piece, it’s a gorgeous Whisky.

“It proves that even way back then so much care, attention and thought went into whisky-making.

I think the replication is absolutely bang on. Richard has done a great job as it’s a very tricky whisky to replicate, because you have this delicacy, subtlety and the smoke just coming through.

“The sweetness, fragrance and spice, and the subtle smoke, are all there in the replica. I’m blown away.”

The Shackleton replica will cost £100, with 5% from every sale being donated back to the Antarctic Heritage Trust, the New Zealand charity responsible for finding and uncovering the original whisky. If all 50,000 bottles sell out the Trust will receive £250,000.

Trust chief executive Nigel Watson said: “From start to finish it’s taken almost four years to safely extract the whisky crate from site and then Antarctica, thaw it in museum conditions, secure permits and complete scientific analysis in Scotland . I am delighted that Whyte & Mackay recognise the hard work and value of the Trust’s conservation mission in Antarctica by making this very generous and welcome donation.”

Richard Paterson said that matching the whisky really tested his blending skills, but it was a true labour of love.

“It was a real privilege getting to handle, nose and taste such a rare and beautiful bottle of whisky. The quality, purity and taste of this 100-year-old spirit was amazing. The biggest surprise was the light flavour and the clear, almost vibrant colour of the liquid. I hope I have done our forefathers and Ernest Shackleton proud with the replica.

“I would like to thank the Trust in particular for their patience, their expertise and their hard work. They fully deserve the substantial funds this special bottle will generate.”

The whole replication process has been documented exclusively for National Geographic Channel for a documentary due to air at the end of this year.

The replica Mackinlay contains whisky from a range of highland malts, including Glen Mhor, which was the original Mackinlay’s distillery before it closed in 1983.

The 47.3% ABV whisky has a light honey and straw gold colour with shimmering highlights.

The nose is soft, elegant and refined with delicate aromas of crushed apple, pear and fresh pineapple. It has a whisper of marmalade, cinnamon and a tease of smoke, ginger and muscovado sugar.

The generous strength of the 47.3% whisky, believed to be high to stop the alcohol freezing, gives plenty of impact, but in a mild and warming way. It has whispers of gentle bonfire smoke slowly giving way to spicy rich toffee, treacle and pecan nuts.

Three bottles of the original Shackleton whisky were flown by private plane from New Zealand to Whyte & Mackay’s Glasgow base by the company owner Dr Vijay Mallya.

There were three cases of whisky and two cases of brandy found on the Antarctic in 2007. One case was removed from the ice and was painstakingly thawed out under laboratory conditions to preserve the bottles and spirit in the best possible way.

That one case was found to have only 11 bottles instead of the usual 12, leading to much speculation about what happened to the missing bottle.