It’s the 4th of September 2010 and Jim is now 60 (how quickly does time fly?) and he has now chosen his drams for his guest’s at his birthday party.

Jim delved deep into his cabinet to ensure that some of his choices were of great character and rarity.

The choices that Jim made are as follows:- 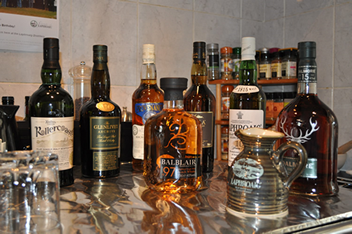 in Sherry Casks an Un-chilled Filtered Bottling from The McGibbon’s Provenance Range.

Well every one that had a wee taste or two of the above selection certainly enjoyed them.

Some of Jim’s guests who were normaly Blended Whisky drinkers,  had their eyes opened a little, and  some of them  asked if they could be put on our list of future guest tasters, the birthday boy agreed.

Part two of  this celebration will be published shortly and that is also a list of some fabulous drams.