They say nobody knows a man like their wife, well I must agree that I fall into that category. To say my husband (Jim) is “unique” is an understatement. 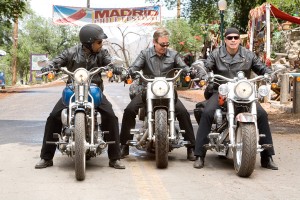 He is a grandfather, “maturing with age” who does not give a toss about his appearance (and believe me he can wear some interesting combinations), so his choices in most things generate the phrase “put it back Jim”. As a family we try to keep him on the right road, but often he creeps under the fence and will come up with his own creations. He recently has decided to go back to riding a motorbike (which is currently in the MOT station getting sorted for the road) and is planning to wear while riding a leather fringed jacket and a crash helmet that makes him look like a storm trouper.

As previously mentioned, my dear, sweet husband’s judgment on what is tasteful is not always on the mark. I know that he harbours a sneaky fantasy that one day Dougie and Jim will ride off into the sunset and take on the Magnificent Seven.

In this fantasy these two Peter Fonda and Dennis Hopper lookalikes, clad in leathers (even if they have fringes) and dodgy helmets set of in Jawa motorbikes to head west to the land of the Magnificent Seven. With all my heart I cannot let them know that they are more likely to look like members of the cast of Last of the Summer Wine than the cast of Easy Rider. Nevertheless, the fantasy continues as they ride up the west coast of Scotland, they encounter some of the most beautiful countryside, and in our fantasy it never rains and there is always a sound track of born to be wild playing,

Like any gladiators about to enter the arena of war, our Whisky Boys have been in training for the battle. They are aware that the Magnificent Seven will challenge their stamina to the hilt, but they are confident that if they take them on one at a time they will conquer and fight another day.

The tactics are agreed, that each will be confronted within their own battlements, so a siege is laid firstly on Bunnahabhain. They are both sat down, drams in hand and then battle commences. The cries of Ohooooooo now that’s good and Jesooooooooooooooo this is a good dram, usually followed by a hearty laugh, and then they make loving cooing noises towards their glass, followed by “there is nothing middle of the road about this one”. As they continued with their struggle amidst the intense battle of opening another bottle the odd tear in their eye and bead of sweat on their brow can be seen, followed by exhaustion as they approached the end of the bottle. Needless to say this was a battle well won and allowed our “Freedom Fighters” to battle another day. Due to this being a fantasy, they were able to get on their bikes and immediately ride to their next arena.

As you can imagine, our soldiers of war were exceptionally successful with their campaign against the Magnificent Seven and continued around Islay and battled with Laphroaig, Lagavulin, Ardbeg, Caol Ila, had a wobble at Bowmore but managed to triumph at Bruichladdich. Throughout the Island the battle cry of “Freedom” was roared every time they opened another bottle of malt.

Like all good fantasies, our Whisky Boys, never had a headache, or felt rough, they never fell off their bikes and the helmets didn’t leave ring marks around their heads, they never felt tired and at no time were they riding under the influence of the MAGNIFICENT SEVEN.