Royal Salute Whisky – 21 Year Old Blended Scotch Whisky.
This particular edition was in an Emerald Flagon and robed in an Emerald Velvet overcoat.

Over the years of visiting my Uncle Duncan Ferguson he would regale us (usually over a dram or two) with his time and exploits in the Royal Navy and how he volunteered for duty as a gunner with the merchant navy fleet, a hazardous job indeed, as these ships were the targets of German U boats and aircraft attacks.
Duncan spoke of being sunk only twice, one of those when a German bomb went down the funnel of his ship and blew out the boiler and the bottom of his ship.

Uncle Duncan also told us of the welcome give to all our guys on reaching a foreign port, of being taken into the homes of the locals (total strangers to Duncan and his shipmates) and given fantastic hospitality in appreciation for all their efforts.

Occasionally a local would recognise his Scottish accent and want to take Duncan home in particular, for sure, like Scotch Whisky, the Scots are welcomed throughout the world.

Duncan says, “he only started drinking after joining the navy”, which probably accounted for him enjoying his odd rum or two, Watsons preferably, but as time passed and after the war his taste turned to his national drink, a good dram of Scotch.

It was while we were having a wee dram the other week, that Duncan told me how, many, many years ago a good friend of his John Docharty (at this time he was the Provost of Falkirk) brought a bottle to Duncan’s house and poured them both a ‘glass’ of what Duncan said was “simply beautiful” but, probably did not exist any more, it was called Royal Salute.

Because my old Uncle Duncan (aged 85) spoke so highly of this Whisky, I made a promise to myself that he should once again taste this “simply beautiful” dram that he so obviously revered.

The search was on, easy, just ‘Google’ it (I’m new to computers and all things internet but even I found this quite easy) up came the result of my search. Royal Salute produced by Chivas and was aged for 21 years in oak casks, launched on the 2nd of June 1953 ( for the records Dougie was not born then, but Jim was) as a tribute to Queen Elizabeth 2nd on her Coronation day.

The name comes from the 21 gun Royal Salute which is fired as a mark of respect for all powerful dignitaries at her Coronation, thee crown worn by the Queen was set in Emeralds, Rubies and Sapphires, these precious gems were the inspiration for the colours of the hand crafted flagons that hold Royal Salute Scotch Whisky.

By clicking on one of the Royal Salute sites I found myself on E-bay and there it was the green flagon, I hastily ran round to Jim’s where he took control and put in my bid, which, later on that evening turned out to be a winner. (beginners luck or what eh!) Since then I have seen the full range of the green,red and blue flagons at Heathrow Airport. 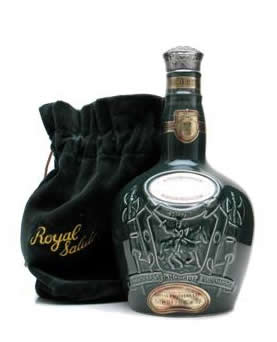 So at Duncan’s invitation the Whisky Boys (Dougie and Jim) together with Duncan all sat down on Sunday 8th February about 4pm for a anticipated tasting.

The tasting went as thus:-
Dougie took charge and was in charge of disrobing the flagon and removing the cork.

On this occasion we all decided to do a joint tasting with some individual comments.

Taste…Silky smooth with a slight tingle on the tongue, filling the mouth with the almost chewable sensation of honey fudge and oak.

Jim’s afterthought.. like all the best Whiskies your glass empties ever so quickly.

Duncan’s final thought and words were, a quote from Robert Burns. ‘Ae fond kiss thine be a joy and a treasure, peace, enjoyment, love and pleasure’.

The Whisky Boys cannot thank Duncan enough for his hospitality that afternoon, especially in allowing us to share in his bottle of Royal Salute. So, Duncan, may you have peace, enjoyment, love and pleasure, cheers from Dougie and Jim aka The Whisky Boys.