Saturday 1st November 2008 the second and last day of the this annual event. 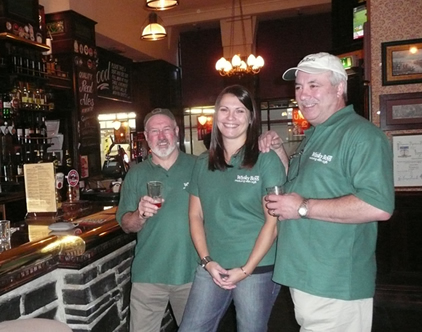 The Whisky Boys (Jim, Dougie and Nicola) dressed in our new polo shirts depicting our logo attended the full day at this Whisky extravaganza. (12 noon until 6 pm).

My first impression was this is a small arena to hold what I thought would be a larger gathering of distillers, products and all things Whisky.

But totally undaunted we carried on with the task of checking out all the stalls with enthusiasm and fervour.

I must let you all know my thoughs on some of the highlights and the lowlights:-

The lads from Ardmore Distillery very chatty totally in tune with there products and even had a small dram from my hip flask, really good to meet guys who love their job so much. 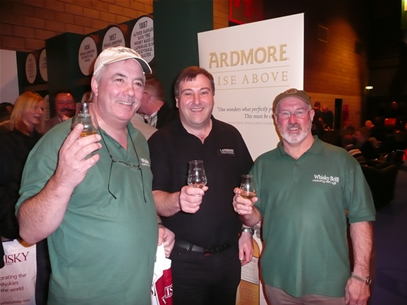 Glad to see plenty of bottled water supplied free, not only for those who want to top up their nip, but for those doing the long haul, to ensure their hydration is kept under control.

My visits to the stands from Islay, Ardbeg, Laphroaig and Bowmore. (wish all of the Islay Distilleries had a presence.)

Dougie and I had a change of mind in respect of the quality and acceptance of the Glen Grant, great drams, helped by the encouragement of the distillery manager who enthused all day about the “best” malt at the show (his).

Clannandrumma, this tribal band were great adding much highlandness to a cold and modern arena, great playing and will look out for them in the future.

In general I thought the event was quite well run but next time take over a bigger arena to allow not only the exhibitors some more elbow room, but to make it a little less claustrophobic for the visitors. Especially when the 3 pm tidal wave of visitors arrived.

Food, terrible with little or no choice, handed over in a paper bag, surely at the price of the ticket there could have been maybe, something hot , even some scotch broth and crusty bread, hope this falls on someones ears who can make a difference for next year.

Well that is some of my ups and downs, the Whisky on show and for tasting was exceptional did not taste a bad or even a mediocher dram all day.

Only tasted one non Scotch and that was the 17 yr old Suntory, it was quite nice but i am one to stick to Scotch (sad that i am).

Most enjoyable chats were with the lads from Bowmore (Andrew Torrance a very knowledgeable and committed manager).

The guys from Ardmore, (Gordon Bruce, a man who loves his work) his colleagues were also a couple of guys who you could not wipe the smile of their faces when talking about their own distillery.

The manager at Glen Grant, he made you think that his distillery was the best ,last and only distillery in the world , would not like to say a bad word about his drams, but you cant his drams were excellent and the Glen Grant may be up for a tasting session by the Whisky Boys soon.

The girl from Glengoyne, ( cant remember her name , think it might be Valerie)she talked very knowlegable and was able to provide us with the answers to all of the questions we had, well done.

Finishing now with a little request, if anyone out there has a spare ticket or two for either of the following
Whisky Live Shows, New York March 2009, Toronto October 2009, THEN CALL ME!!!!

Will certainly see you all again in Glasgow next year, cheers.