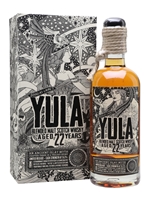 The third and final limited-edition bottling in Douglas Laing's Ancient Islay Myth series. This is a blend of selected island single malts that has resulted in a memorably maritime whisky with gentle smoke.

The legend of beautiful Norse goddess Yula is a tragic one. With an apron full of stones she went on a quest to find her love, but the stones fell out and formed a trail of islands in her wake. Yula died in the perilous waters near Islay, her last pebble forming standing stones on an island whose name means 'Yula's Isle'.