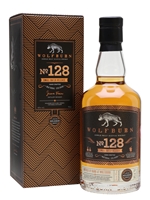 Not only is this the first-ever small-batch Wolfburn, it is also the first time the distillery has created a lightly peated spirit - making this the forerunner to Morven, the peated whisky that has just been added to their core range. Initial tobacco notes are followed by lemon, crisp apple, honey and vanilla, alongside warming peat and earthiness.