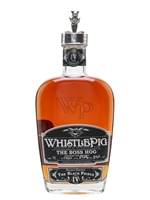 The Armagnac-aged rye whiskey named Best in Show after the blind tasting at 2017's San Francisco World Spirits Competition. This fourth edition of WhistlePig's Boss Hog has aromas of apricot, fig, plum and toasted almond, which are joined by cinnamon, citrus and black tea on the palate.

This 14-year-old rye whiskey takes its subtitle, 'The Black Prince', from England's Prince Edward of Woodstock. In the 14th century Edward, known as 'the Black Prince', raided France and included many of the best Armagnac barrels in his substantial loot. To tie in with this theme, the hog on the bottle's stopper is wearing chain mail.