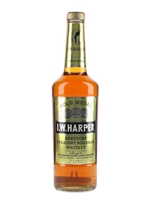 The IW Harper brand was reintroduced in the mid 2010s after a 20-year hiatus, and was one of only a handful of brands to be able to be produced during Prohibition. A classic bourbon with notes of toffee and vanilla.