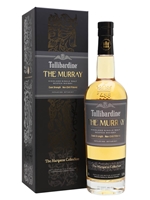 The second release in Tullibardine's Marquess Collection, The Murray 2005 is a bourbon-aged 12-year-old single malt with notes of butter biscuits, vanilla and red fruits.