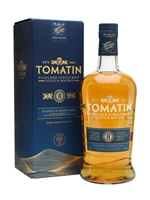 Initially released for travel retail, this eight-year-old from Tomatin has been aged in a combination of bourbon and sherry casks, resulting in a whisky with notes of apples, pears, ginger and cinnamon.