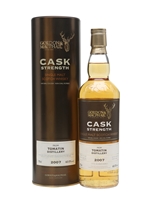 A cask-strength Tomatin from independent bottler Gordon & MacPhail. Distilled on 22 November 2007 and aged in four first-fill bourbon barrels for eight years, this is sweet with notes of apple, banana, custard and chocolate.