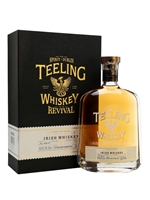 Volume III in Teeling's The Revival series is a 14-year-old whiskey. Matured initially in ex-bourbon barrels before being finished for the final year in Pineau-des-Charenetes casks, this has notes of dried fruit, toffee, almonds and chocolate.