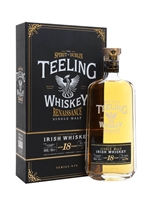 The fifth release in Teeling's Renaissance series is an 18-year-old Irish single malt that was initially matured in ex-bourbon barrels and finished in ex-Calvados casks, before being bottled in January 2022. Aromas of candied apples, cinnamon, baked pears and mint fill the nose, complemented by notes of apple pie, golden raisins, pink peppercorn, dried cherries, maple syrup and oak throughout the palate and lingering in the finish.