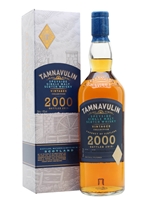 Despite the distillery's closure between 1995 and 2007, for a brief five weeks in the spring of 2000 the stills were relit and this Tamnavulin single malt was made. Matured in a combination of ex-bourbon and Amoroso sherry casks for 18 years before being bottled in 2019 for the distillery's Vintage Collection. Creamy aromas of vanilla, brown sugar, fried banana and cinnamon pastries fill the nose, and the palate offers notes of caramelised nuts, praline, baked apples and banoffee pie. Runny honey, apple crumble and homemade vanilla custard linger in the finish.