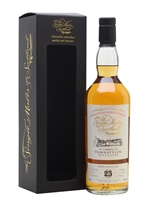 This single-cask bottling of Tamnavulin from the Single Malts of Scotland series is packed with buttery and malty notes, with loads of fruity character. It was distilled on 26 November 1992 and bottled at 25 years old from a single hogshead on 23 June 2018. Tamnavulin is a young distillery – only founded in 1966 – which doesn't appear as a single malt very often.