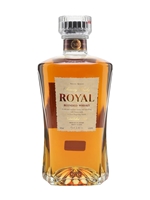 The slim bottle (66cl) release of Suntory Royal blended whisky, first introduced in 1960 to mark the company's 60th anniversary. Light and easy to drink, this is a superb entry-level Japanese whisky.