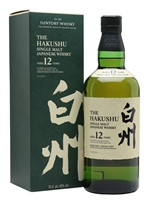 A perennial favourite and a must-try for anyone interested in discovering Japanese whisky. Hakushu is owned by Suntory, founders of the first Japanese distillery, Yamazaki. The original Hakushu distillery was built in 1973, with another distillery building called Hakushu Higashi (west) added in 1981.