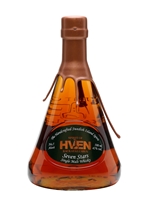 Alioth is the fifth release in Spirit of Hven's Seven Stars series, named after the starts of the Great Bear. This lightly peated release has notes of chocolate, raisins, plums, honey and citrus fruit.