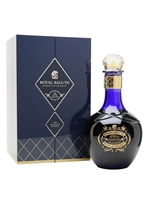 A limited edition ultra-premium blend from Pernod Ricard, topping their Royal Salute range and named for the 62 gun salute fired for royal anniversaries. The whiskies used to make the blend are aged for at least 40 years and it is packaged in an elegant blue decanter, painted and inlaid with 24-carat gold, and comes in a blue case complete with a book describing the creation of the blend.