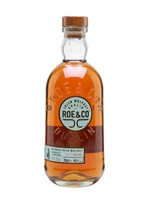 Roe & Co was launched in 2017, marking Diageo's return to Irish whiskey. A blend of malt and grain from various distilleries across the country, it's been matured predominantly in first-fill bourbon casks. This has a velvety, creamy texture and notes of sweet fruit and vanilla.