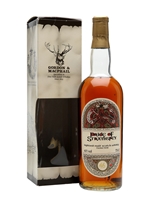 A very rare bottle of pre-war 1938 vintage Pride of Strathspey from an unnamed distillery and released by independent bottler Gordon & MacPhail. This was bottled after maturing for 46 long years in the mid 1980s, and sports the beautiful Books of Kells label.