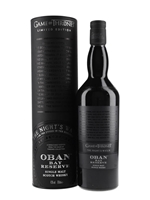 The brothers of the Night’s Watch take an oath and pledge their lives to protect the Seven Kingdoms and guard them from the terrors that lie beyond the ancient barrier of ice, The Wall, from their base at Castle Black. There lies a frozen wasteland which, legend has it, is inhabited by giants, wildlings and the Night King and his army of White Walkers who bring with them the long night. Just like Castle Black, Oban Distillery sits at the foot of a steep cliff that overlooks the bay, the frontier between the West Highlands and the Islands of Scotland. The richness of the whisky is balanced with a woody, spicy dryness that would keep even the Night’s Watch warm in winter.