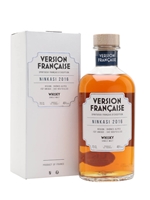 A 2016 Ninkasi French single malt from indie bottler La Maison du Whisky's Version Francaise series. This whisky was distilled in 2016, only a year after the Lyon brewery began distilling, and is a combination of peated and unpeated spirit. Aromas of nectarines, orange, mango and apricot mingle with honey and delicate smoke on the nose, complemented by notes of yellow peach, white grape, mango, pineapple, orange, peat and tobacco that linger in the finish.