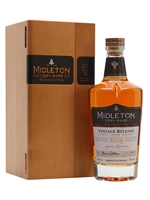 Midleton Very Rare 2018 is a marriage of specially-selected casks of pot still and single grain Irish whiskeys, all of which were aged exclusively in lightly-charred ex-bourbon barrels for at least 12 years. This whiskey has rich notes of vanilla on the palate, with subtle floral notes and fresh citrus alongside black pepper, cloves and cinnamon. The vanilla builds alongside toasted oak and sweet orchard fruits for a lingering finish.

Created in 1984 by Master Distiller Emeritus Barry Crockett, Midleton Very Rare is an expression of his expertise and his art. A new vintage is released every year, and this year the series celebrates its 35th release.