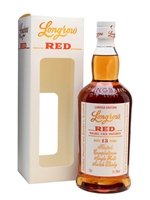 The 2017 release of Longrow Red was aged initially for 12 years in bourbon barrels, before being finished for 15 months in Malbec casks. Smoky and fruity with notes of sea spray, apple, plum, rhubarb and cherry.