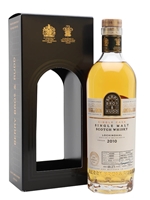 A 2010 Lochindaal single malt from indie bottler Berry Bros & Rudd, matured in a single ex-bourbon barrel for a decade before being bottled in 2021. Aromas of vanilla, camphor, cloves, damp wool and peat smoke fill the nose, complemented by notes of peach, apple, lime, smoke and gingerbread throughout the palate.