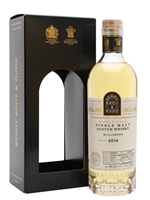 A 2014 Williamson single malt from Berry Bros & Rudd, finished in an ex-Guyanan rum cask for 12 months, before being bottled in 2021. Bold aromas of peat smoke open on the nose, followed by treacle, heather and wine gums. The palate offers notes of charred pineapple, caramelised banana, rich smoke and warm spices that linger in the finish.