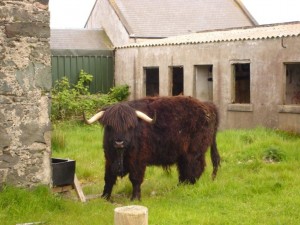 were in the field across from the house. Hairy mums with hairy babies wandering over for their morning drink from the water trough.

The day started with a hearty Islay breakfast finished off with toast and fine Scottish honey and gallons of tea or coffee. Once all morning chores were finished off they set off on another Islay adventure. Our challenge that morning was to find kirby grips (hair grips) and fresh rosemary – failed on the fresh rosemary, but managed to get dried.  Big success on the kirby grips though. So off we set to Bowmore, only to find the Co-Op (the biggest store on the Island) was closed until 12.30 and we had to make the return journey around the top of Loch Indaal towards Port Charlotte. This was no real hardship as we planned to attend Bruichladdich Distillery open day, which historically we have found to be excellent. The weather was overcast with a brisk sea breeze, but dry – always a surprise in Scotland.

Once we approached the gates of Bruichladdich Distillery we were entertained by two young girls playing the fiddle – we duly paid our £5.00 entry fee each which also included two drams each of Bruichladdich Rocks single Malt Whisky (which was actually a bottle Jim had brought with him for house sampling). The event was opened at 12.00 noon with the Islay Pipe Band marching into the Distillery and playing a variety of stirring tunes in the court yard. 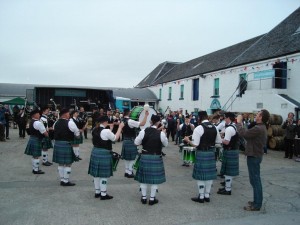 At one end of the courtyard there was a two tier stage erected to allowed the acts to tower above the gathering crowd and equally gave the audience an excellent view.

Throughout the day Jim McEwan was conducting tastings and masterclasses.

A brief breakdown of all the performing acts scheduled for the day was announced as:

At one point throughout the proceedings Jim McEwan, Production Director jumped on stage asking the Islay Pipe Band to come to the fore and announced that Bruichladdich Distillery will be sponsoring this pipe band for the coming year. At this point Jim also auctioned a limited edition of Malt Whisky which achieved a price for £540. 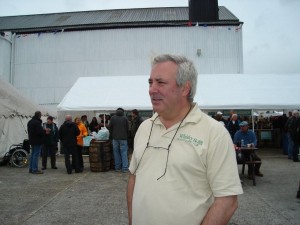 Meanwhile half way through the day Jim and Jacqueline had to do a dash up to Port Askaig to meet the 3.00 p.m. ferry where our friend from Crieff, Iain Caskie was coming over for his first festival visit. Once the new member of the team arrived on land we whisked him off back to the Bruichladdich open day. By this time the sun was beginning to shine (still breezy though), but our band of three all agreed it was time for a wee dram and a bite to eat. There were a variety of food options, there was a large barbeque generating delicious burgers, there was a oyster bar selling local Loch Gruinart Oysters served with your choice of lemon, tobasco or a splash of Bruichladdich and a scallop section operated by Francois of “Bon Appétit” who was flambéing these large gems in Bruichladdich’s own malt, with some herbs and butter.
To wash down this fantastic fare there was a beer tent selling the new Bruichladdich ale from Islay Ales (which Jim was keen on), there was a Bruichladdich Malt bar and David McMurray Malt Bar and Jacqueline’s favourite was Ewalds’ & Tays’ Laddie Cocktail Bar of which Jacqueline tried “Heartful Souls” dedicated to the wonderful Laddie Family (2 parts Bruichladdich X4, 1 1/2 parts cranberry/raspberry liquor, 3 parts cranberry juice, 2 parts passion fruit juice and finished with marinated strawberries (long, cool and delicious). 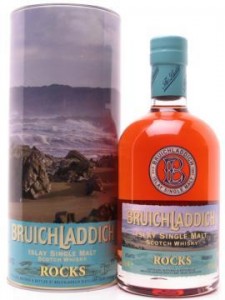 merchandise including the option of bottling you own 2009 Homecoming’ Valinch Single Malt, listening to the various entertainment, and chatting to many visitors and locals.

Iain, albeit a regular visitor to the Island, has never seen so many cars, so many people and so many drams all in the one place, and this is only a taster as this is only our first day. Bruichladdich genuinely had managed to capture the festival spirit and had established a benchmark for all other open days.

We are not finished with Bruichladdich as we had visited on one or two other occasions this week and at a later stage you will be able to read about escapades with Jim McEwan and his staff.

We left the Open Day about 5.00, headed home where we got Iain settled into his accommodation( Iain was heard to say fabulous digs) and Jacqueline prepared a one pot chicken dish (that’s what we needed the rosemary for). So a few classes of wine with dinner, tummies full, we put our feet up for an hour and then we were off again and visited both the Port Charlotte Hotel (where the Maverick Angels were playing and the Lochindaal Bar (excellent white wine – Chablis). It had been a long, but delightful day on Islay – so off to bed we headed to await the Hairy Mums with the Hairy Babies who would awake us in the morning – how idyllic does this sound !! Nighty Night – see you tomorrow.