Glengoyne Asks – “Who are these guys?”

GLENGOYNE ASKS – “WHO ARE THESE GUYS”

And the Whisky Boys have the e-mail to prove it.

Yes it is that time again when the Whisky Boys visit Glengoyne’s Christmas fayre. On this misty cold Scottish morning we set off into the countryside to the new location at Edenmill Farm which was all under cover and only a stones throw from the distillery. I must admit I preferred when the fayre was held on the distillery site, seemed to make it more Christmassy and romantic, but must admit it was much more comfortable being under cover.

On this occasion the Whisky Boys party comprised of Jim, Dougie and Jacqueline (wife), Nicola had a business engagement elsewhere (her loss). As at most of these events there was an excellent turn out and all the visitors were not disappointed by the wide selection of stalls selling quality merchandise. There were cakes, liqueurs, tartan crockery, lingerie, artworks, handbags, breads, cheeses, spices, handmade cards to name but a few. Although the items were not cheap, they were of quality and many of the items would make excellent Christmas gifts. 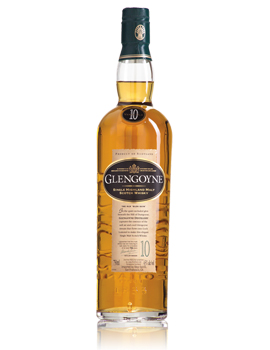 We worked our way around all the stalls and headed for the smokey marquee where there was a pig being roasted on a spit, and a hot grill for exotic large bistro style toasted sandwiches. At other points in the marquee were Loch Fynne oysters. In the right hand corner there was the largest section, dedicated to Glengoyne Whisky and all their associated merchandise. The Whisky Boys started off with a Smokehead, again the designated driver me, had a coffee. The atmosphere was welcoming and inviting and we all found ourselves with big smiles on our faces, I genuinely was enjoying the ambience, the big grin from the Boys may have been more influenced by the Smokehead.

As part of the days entertainment there were a variety of chefs giving cooking demonstrations, and of course they were incorporating the magical Glengoyne All three of us parked ourselves strategically so we could have an excellent vantage point and watched the chefs from Loch Lomond Golf Club show us how they make one of their classic menu dishes. We all found this most interesting, and even better we managed to get a taste of this delightful dish. Between the cookery demonstrations there was a band paying Christmas music which enhanced the Festive mood.

Once we had finished watching the various chefs, and yes Dougie did manage to have a shot at opening an oyster soaking it in 12 year old Glengoyne and guess what scoffing it. There is a saying in Scotland “he would get a piece at any door” and it does apply to our Dougie.

At this point we wondered back over the the Glengoyne section and the “Boys” met up with Stuart Henry and introduced themselves. It was at that point that there was a bit of humorous banter re the e-mail. The “Boys” were congratulated on the website and we were all invited to sample the new 12 year old cask strength. It was agreed that the day could not be concluded without the “Boy”s trying the 21 Year Old, from first fill oak sherry casks. This really impressed the boys, although not cheap at £64 per bottle ( a special price for this festival day only), it was excellent, to the extent that Santa may be bringing a bottle to someone on Christmas day.

The overall analysis of the day was that a great time was had by all. If there is anything to get you in the mood for Christmas is to attend one of these fayres and I would highly recommend, especially if you live in the Glasgow area to attend this one at Glengoyne or Edenmill, whichever venue is chosen for next year.

The kids had a animal petting area, and Santa was on hand at the grotto. 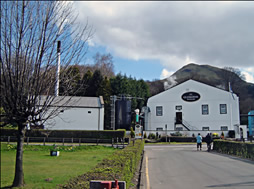 To finish off this lovely day Jim was instructed that he had to cook a really good meal for Dougie and Jacqueline, so off we went to the Edenmill farm shop. Our meal comprised of pheasant pate to start, ribeye steaks, with a slice of Stornoway black pudding (the best in the world), mushrooms and potatoes, followed by some cheese and oatcakes. As I am sure you will all appreciate such a meal could only be finished off by a large dram or two of Glengoyne 12 Year Old Cask Strength.

It was a little bit more expensive to buy the evening meals main ingredients at the farm shop, but,there is not a supermarket in the land that can compete with the freshness and quality we were able to get from the experienced staff at Edenmill, we shall be back.

Once again we thank the staff from Glengoyne Distillery and especially Stuart Hendry for the hospitality shown and drams he let us taste.

Watch our for our report on this event next year, hope to meet you there.