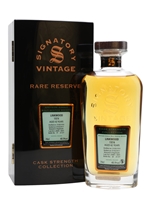 Two casks of Linkwood's fruity, spicy whisky, distilled at the end of May 1974, have been filled into 237 bottles by Signatory. A fabulous chance to try a long-aged example from this lesser-seen distillery.