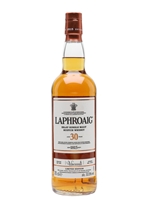 This is the 2016 release of Laphroaig 30 Year Old. Distilled in 1985, this has been aged exclusively in bourbon barrels. Classic Laphroaig with notes of orange peel, vanilla, coriander and cigar box.