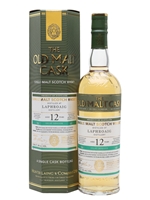 A single-cask Laphroaig bottling from Hunter Laing's Old Malt Cask range. The traditional medicinal notes are joined by oysters, peat, iodine and dense smoke. A rich and warming dram. This single malt was distilled in September 2004 and bottled in August 2017.