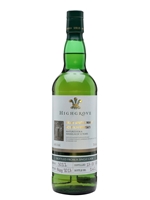 12-year-old Laphroaig, bottled for Highgrove House, the private residence of the Prince of Wales. Charles is a big Laphroaig fan, and his official bottlings are always from the distillery. Bottled at 12 years old, this is down the line Laphroaig, with medicinal smoke, ash and a fruity backbone. Excellent stuff.