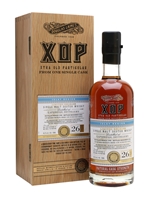 A 26-year-old Laphroaig from Douglas Laing as part of the Xtra Old Particular series. Distilled in March 1990 and aged in a refill hogshead, this offers enticing notes of grilled banana, treacle, cracked pepper and smoke.