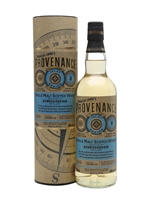 A single cask 2008 Bunnahabhain from Douglas Laing as part of the Provenance range of whiskies. Only eight years old but full of flavour with notes of macerated fruit and sweet spice.