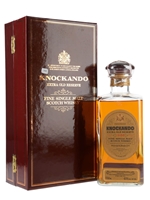 A wonderful old bottling of the increasingly rare Knockando 1965 Extra Old Reserve. This version was bottled in 1990.
Please note that this is an old bottle and the closure may have deteriorated; care should be taken when opening the bottle. As such, the item is sold as described.