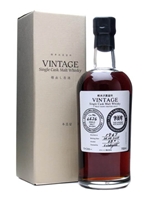 Here it is - the legendary Karuizawa 1967 42yo from cask 6426. The oldest and most famous Karuizawa ever bottled when it appeared at the tail-end of 2009, we only ever had around 200 bottles of this one, and after Whisky fun and Whisky notes both gave it humongous 95 point scores, it sold out in a little over 24 hours.